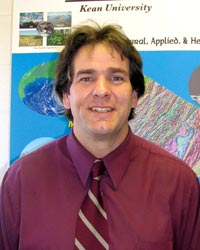 We are very sad to announce the passing of past president, Dr. John Dobosiewicz (2011), who died unexpectedly at the age of 48 while traveling in Scotland on August 5, 2013.

At the time of his death, John, was Executive Director of the School of General Studies at Kean University, NJ. He began his work at Kean in 1993 as an adjunct, and joined the full-time faculty in September 2001 in the Department of Geology and Meteorology. He was named Executive Director of the School of General Studies in September 2010.  John was also serving his second term on the Faculty Senate, where he was first elected in 2009. He served as secretary for the Faculty Senate from 2010 to 2012. He served on the University Planning Council (UPC), to which he was appointed in 2011. John earned the Presidential Excellence Award for Service in 2008 and was initiated into the National Honor Society of Phi Kappa Phi in May 2009, and had been serving as its President since September 2011.

John received his Ph.D, from Rutgers University. His research interests were in hydrology, climatology, and geographic information systems (GIS).

John was a well-loved sports coach in his home town of Westfield, NJ, where he was known fondly as “Coach Dobo.” He was a member of the Westfield Soccer Association and the basketball, baseball and softball leagues, coaching both boys and girls teams. John is survived by his wife of 19 years, Diana Pereira, and four children, Hailey Paige, Christian John, Jack Tyler and Faith Madison.

The Dobosiewicz Children’s Education Fund (DCEF) has been established to help raise funds for the educational costs of John’s 4 school-age children. Donations can be made on their website.